March – Wine of the Month

September – Wine of the Month 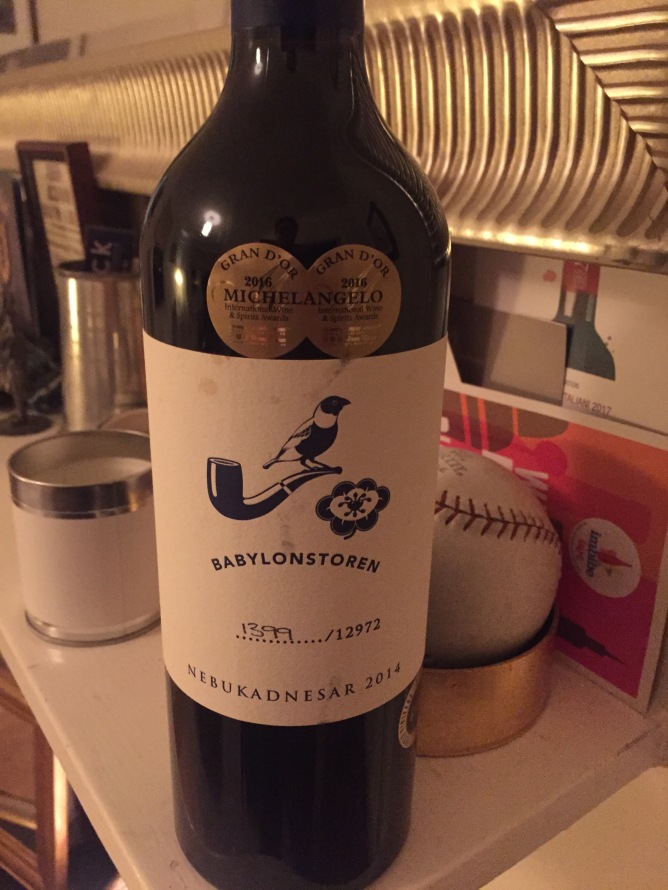 July – Wine of the month 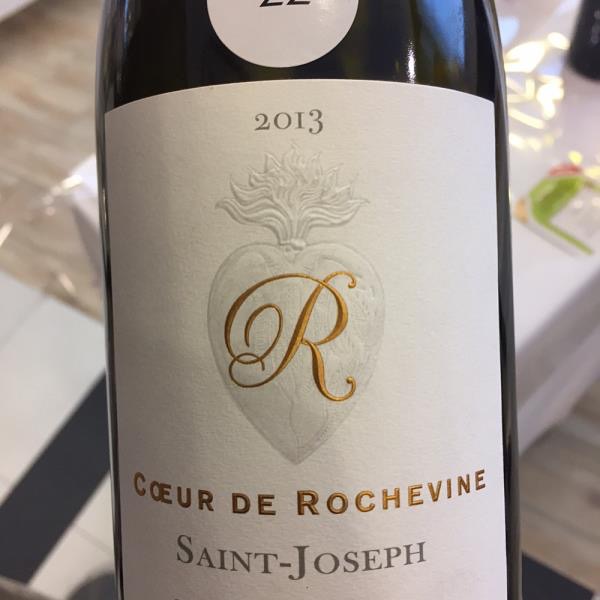 June – Wine of the Month

May – Wine of the Month 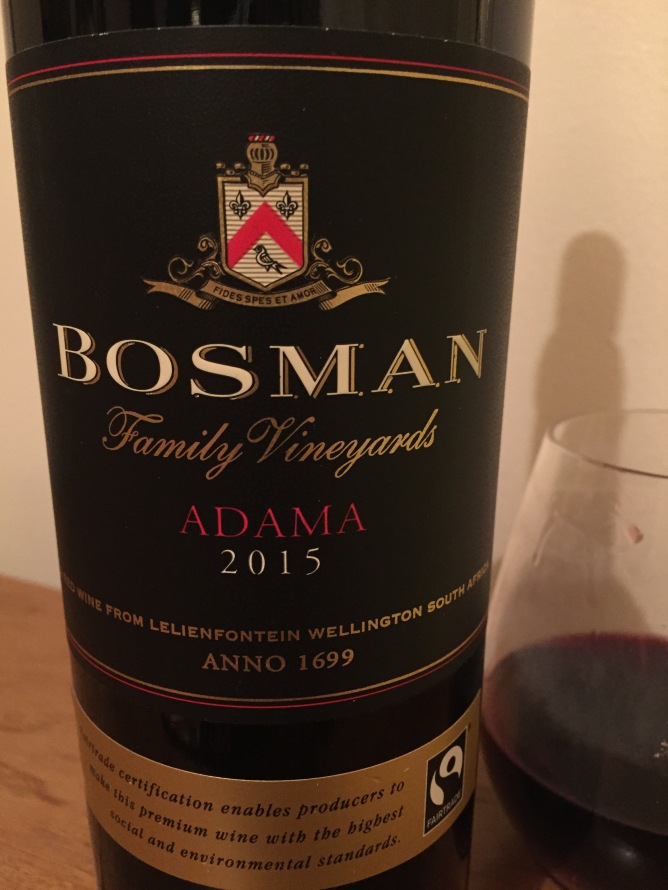 April – Wine of the Month

You can usually hear the Kalmoesfontein winery before you can see it. Blasting out an eclectic mix of rock and pop that echoes around the Pardeberg mountains. As the “Rules” state on a white board at the entrance to the cellar, ‘Remember to change the record’ and while this refers to a stack of 12 inch LPs of varying age that lie next to a turntable, the instruction could be taken as a company motto. For Adi Badenhost, of AA Badenhorst wineries, has changed the record.

Adi Badenhorst is another of those wine desperados that rode into town in Swartland and changed the way that wines were made there. Swartland is originally cereal country, much of South Africa’s grain crop is grown here and the long straight roads over endless wheatfields dotted with cattle are reminiscent of the American midwest. Hence all those cowboy references.

When grapes were grown here in the bad old days, most were planted for distillation and so not a great deal of care was made with the production. As long as the crops were high and they made a minimum alcohol requirement you sold your crop at a standard rate and the big co-ops such as KWV made them into sprit or grape brandy.

The Change in the political situation in South Africa brought big changes to their wine industry. Greater outside influence and a wider market mean that higher quality wines were in demand. Quite a few of the mass producing vineyards in the Swartland fell into neglect and some were even pulled up.

For an enterprising young winemaker such land was comparatively cheap and afforded the opportunity to set up on your own and start following your own ideas about how to meet the demand for quality wine. Badenhorst has a winemaking lineage and carved out his own credentials at the excellent Rustenberg operation.

It is astounding that in the space of 10 years he has soared from struggling on a neglected, old fashioned winery, not used since the 1950′ s to being an international winemaking superstar.  Conjuring silk purses from the sows ears through his enthusiasm and drive, allied to a good splash of unorthodox irreverence to the received wisdom of the day. Even with his sleeves fully rolled up he is producing aces from nowhere.

Adi is very ably assisted by his winemaker Hanneke Botha who welcomed us as we arrived late in the afternoon. Adi himself was jetting off to Europe but had time to say hello and swap a couple of pleasantries. Hanneke’s tireless energy and enthusiasm was clear as she was totally unphased by our surprise arrival. Up to her arms, literally, in some winemaking equipment that had malfunctioned , she brushed the hair from her brow and smilingly agreed, over the full volume rock music, to show us around an hour later.

We were staying on the winery anyway, in the quirky and very comfortable Silo, a converted grain silo, so we drifted down to the nearest town to get some provisions for the evening.

Amazingly for the winemaker on one of the Cape’s best known wineries, Hanneke seemed happy to show us around the winery. Taking us through a dozen or more samples from the newly fermenting vintage, straight from the cask, after a very full day working in the winery.

She then proceeded to let us taste the following wines. Badenhorst principally makes 4 wines, Family Reserve Red and White and the Secateurs Red and White. Along with this he and Hanneke make a range of Special bottlings such as the Raaigras Grenache below that are much sought after and rarely available for long. The small range allows them to focus on the quality of the fruit and the low intervention wine-making that they practice.

Adi also makes an aperitif, Caperitif, his own tonic water and a renowned Agave Mezcal (Tequila).

A blend of Shiraz, Carignan, Cinsault and Tinta Barocca, this is a riot of black cherry and fig fruit on the nose with a dark cherry core on the palate underpinned with a textural style that runs through all of the Badenhorst wines. Good astringency and grip but with ample fruit to complement the texture. 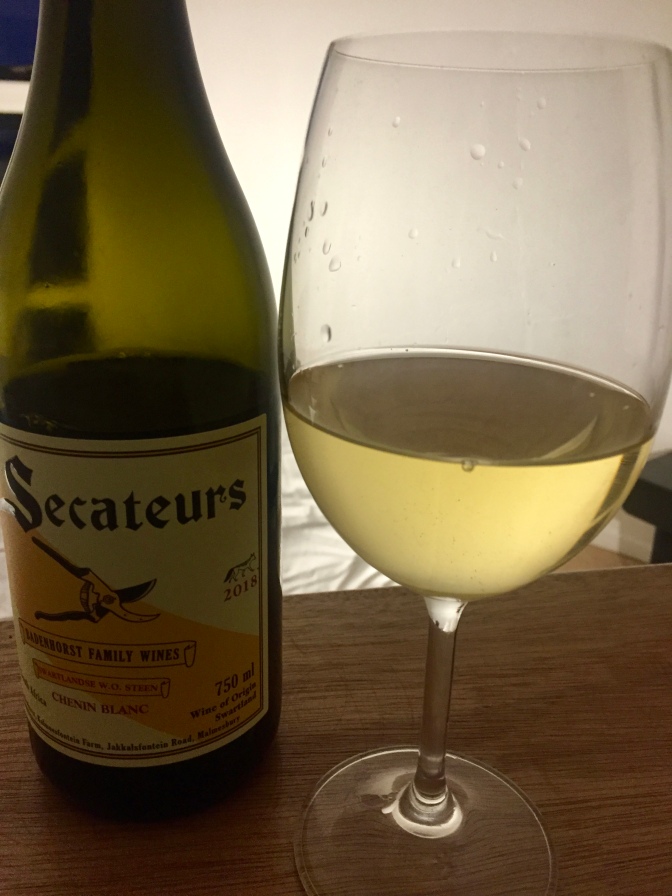 Secauteurs 2018 Chenin 13%
Incredibly, the fruit for this wine would probably have gone for distillation in the winery’s former days. Although the expertise of Badenhorst and his methods will have enhanced the deep, satisfying quality of this delicious white since those times. Pure fresh lemon and honey  on  the nose, fresh but luscious with a hint of pineapple. This exotic note also comes through on the palate with a weighty luscious lemon and tropical fruit flavour that wraps itself around the tongue with that gorgeous texture.

Grenache Old Vine Raaigras 2016
The first of these wines I tasted at an Old Vine Project tasting at South Africa house. Intense, black pepper, sprinkled wild strawberry notes with hints of pomegranate and cherry on the edge. The depth and texture of this warming full red was moreish.
Family Reserve White 2018
A blend of some 12 grape varieties, predominantly Chenin, Grenache and Roussanne, this is an extraordinary wine that is a bit of a surprise on the nose with a nutty edge and a lemon zest and oatmeal trace. On the palate more exotic fruits, pineapple and passion fruit with a touch of honey and aniseed.

View all posts by winevineblog